THUNDER BAY—The Corner Gas crew from Dog River are back for more fun and adventure in the Corner Gas Animated series on The Comedy Network beginning April 2 at 8 p.m.

“We’re doing 13 episodes of Corner Gas Animated,” says Lorne Cardinal, a Cree actor from Alberta who is continuing his role as Davis in the new series. “It’s just as funny as the regular show but there’s no bounds in the animated version because we’re not constricted by costs. So you can think up the wildest story and all you have to do is draw it, so that frees us up for a lot more crazy stories.” 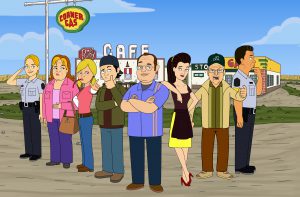 The Corner Gas crew are back for another season of fun and adventure in the new Corner Gas Animated series, which premieres on April 2 at 8 p.m. on The Comedy Network.

Cardinal says the whole cast is back except for the Emma character, who was previously played by the late Janet Wright.

“Half the cast is in Toronto and the other half is in Vancouver,” Cardinal says, noting that the actors record the show’s audio “all in one go” from both locations. “The only thing to deal with is a seven-second delay. But it’s great to hear all the cast. We can hear each other on the headphones. It’s like being together again.”

Cardinal says his role in the half-hour comedy series is “just one of the people in the town.”

“So it’s a nice change,” Cardinal says. “I don’t have to be a chief or anything. I’m just a human being who has a job as a police officer in this small town.”

Corner Gas originally ran for six seasons from 2004-2009, with the gas station set in the fictional town of Dog River, Sask. The original show received six Gemini Awards during its six-year run and averaged 1 million viewers per episode.

“The original series really lends itself to being animated,” says Brent Butt, creator, executive producer and star of Corner Gas Animated. “The humour, the warmth, the antics and cast have all found their way into the new animated show. It feels like Corner Gas and I couldn’t be happier. I can’t wait to unveil Corner Gas Animated. Tune in Easter Monday.”

The premiere episode of the new series features Butt messing up on a fuel order, which leads to Corner Gas running out of gas.

“The scripts are very funny,” Cardinal says. “They’ve got a lot of crazy stories and I think people will enjoy it. I hope they do because it’s just as funny as the live version.”

Cardinal says the original series has “the most loyal fans” across Canada and into the United States.

Cardinal says the audio was recorded for the episodes first and then the animators used the audio to create the animations because they needed to match the expressions to the voices.

“I just met a few of the animators briefly,” Cardinal says, noting that one of them was the animator who drew his character. “He said it was nice to see the person behind the voice for a change.”

Information about the series, including merchandise, is available at cornergas.com.