In anticipation of the debut of CORNER GAS ANIMATED and the launch of the Dog River Walking Tour in Rouleau, SK, The Comedy Network has released a first look at some of Dog River’s most iconic locales, re-imagined. From Emma and Oscar’s house, to Foo Mart and Dog River Hotel, fans can catch a sneak peek of their favourite fictional town…animated! Photos are available for download at https://www.cornergas.com/attractions.html. 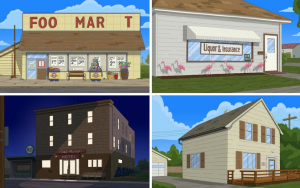 The 13-episode, half-hour animated version of the acclaimed, smash-hit comedy franchise CORNER GAS from 335 Productions and Vérité Films is set to premiere on Comedy in 2018.