CORNER GAS ANIMATED Becomes the Most-Watched Series Premiere in the

History of The Comedy Network 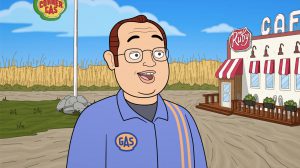 –Premiere episode “Bone Dry” draws 360,300 viewers to date, the biggest debut in Comedy’s history –
– All new episodes air Monday nights at 8 p.m. ET/PT–
– Viewers can catch up on past episodes on demand through Comedy GO and TheComedyNetwork.ca –

TORONTO (April 9, 2018) – In advance of its second episode airing tonight, The Comedy Network confirmed today that the series premiere of CORNER GAS ANIMATED has become the highest-rated debut in The Comedy Network’s history. With just four days of preliminary playback data for the premiere, Numeris data confirms that 360,300 viewers so far have watched the April 2 debut episode “Bone Dry”.

With final playback data still to come, the premiere episode of CORNER GAS ANIMATED surpasses the series premiere of ANGER MANAGEMENT, which was previously the top-rated series debut on Comedy, dating back to 2012. In addition to setting a record for Comedy, CORNER GAS ANIMATED was the #1 entertainment specialty program on Monday, April 2 among all key demos (A18-34, A18-49, and A25-54).

“The CORNER GAS team have once again delivered for audiences and fans,” said Pat DiVittorio, Vice-President, CTV and Specialty Programming. “CORNER GAS ANIMATED has reinforced the franchise’s history of making history. We couldn’t be happier to welcome them back and have this record-breaking series lead Comedy’s line-up.”

Viewers can catch up on past episodes of CORNER GAS ANIMATED on demand through Comedy GO and TheComedyNetwork.ca. All 107 episodes of the original six-season series CORNER GAS, as well as the feature film, CORNER GAS: THE MOVIE, are streaming now on CraveTV.