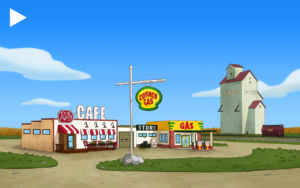 TORONTO (December 19, 2016) – Life in Dog River is about to get a lot more animated! Following a trailblazing six-season run and a blockbuster 2014 movie, The Comedy Network announced today it has greenlit an all-new animated version of the acclaimed, smash-hit comedy franchise CORNER GAS from 335 Productions and Vérité Films. The 13-episode, half-hour series for The Comedy Network’s 2017-2018 broadcast season is the latest original 4K production from Bell Media. Re-imagined by CORNER GAS creator and star Brent Butt, who released a sneak peek of his animated-character yesterday, the all-new CORNER GAS ANIMATED delivers its revered brand of comedy, but this time in an animated Dog River where anything is possible.

The new series comes from CORNER GAS executive producers Brent Butt and David Storey from Prairie Pantoons (335 Productions), and Virginia Thompson from Moving Mountoons (Vérité Films), in association with The Comedy Network. Animation will be produced by Prairie Pantoons, Moving Mountoons and Smiley Guy Studios. The series begins pre-production in January 2017 in Vancouver and Toronto, with the main cast confirmed to return. Producers also confirmed today that beloved character Emma will live on in the animated world with the blessing of the late Janet Wright’s family.

“We are thrilled the original cast is back and that the Emma character will live on in the animated series,” said Executive Producer Virginia Thompson. “Emma will remain funny and fearless in the new series and will pay tribute to Janet Wright for many years to come.”

“We’re ecstatic to be heading back to Dog River with a new animated version of CORNER GAS for The Comedy Network,” said Mike Cosentino, Senior Vice-President, CTV and Specialty, Bell Media. “The CORNER GAS franchise is iconic and much loved by the entire country. We’re excited to again work with this great production team to deliver more CORNER GAS to the dedicated fans who made the franchise so incredibly successful, and also introduce this wonderful world to a new audience.”

CORNER GAS ANIMATED brings together Butt’s comedy style and love for comic books. Before pursuing his passion as a stand-up comedian, Butt and a friend started a publishing company – Windwolf Graphics. His first comic, Existing Earth, was nominated for a Golden Eagle Award. Windwolf Graphics published two issues before Butt hit the stand-up circuit full time. Butt’s passion for comics lived on through his work, a common theme in the CORNER GAS franchise. Bringing CORNER GAS into the animated world allows Butt’s comedy to be as limitless as his imagination.

“I’ve always loved animation,” said Creator, Executive Producer and star Brent Butt. “After high school, I was accepted into the animation program at Sheridan College, but I chose to pursue stand-up comedy. It’s been a huge amount of fun creating animated scripts for our CORNER GAS gang. We used to come up with some pretty wild fantasy sequences and bizarre flashbacks in the old story room, but were limited with what we could do in the real world. Buckle up! We’re not in the real world anymore!”

The new animated CORNER GAS also presents a vast new world of opportunity for branded integration. With Dog River open to expansion through animation, and beyond, brands are able to explore the environment in new ways.

All 107 episodes of the six-season original series, as well as the 90-minute movie, are available now on CraveTV.

About the CORNER GAS Franchise:

The smash hit Canadian television franchise CORNER GAS is an entertaining depiction of small-town prairie life.CORNER GAS the original television series was created by Brent Butt, executive produced by Brent Butt, David Storey, and Virginia Thompson and developed by Brent Butt, David Storey, Mark Farrell, and Virginia Thompson for CTV and The Comedy Network. It premiered January 22, 2004 on CTV with 1.15 million viewers and was a runaway hit. Dog River soon became a favourite Canadian television destination. During its entire six-season run, CORNER GAS was the #1 Canadian sitcom in Canada, maintaining an impressive average audience of 1.4 million viewers over its 107-episode run. The series finale made television history when a record-breaking 3.02 million viewers tuned into the series finale on April 13, 2009. It was a new audience high for CORNER GAS and is still the largest audience on record for a Canadian scripted television series.

Winner of the 2016 Golden Screen Award for the most-watched Canadian Drama / Comedy Program, Corner Gas: The Movie renewed its love affair with fans in December 2014. Just as it did when it began 10 years ago, the smash hit Canadian television franchise CORNER GAS continued to blaze new trails.

Created by Brent Butt and executive produced by Brent Butt, David Storey and Virginia Thompson, Corner Gas: The Movie sold out 100 theatres across Canada, and reached over 7 million TV viewers. It achieved tens of millions of social media impressions, and sold over 60,000 DVD and Blu-ray units.

Canada’s first specialty comedy service, The Comedy Network airs comedy of all kinds, 24- hours-a-day, across multiple platforms, including a revolutionary broadband service at thecomedynetwork.ca. Launched in October 1997, Comedy broadcasts, uncut and uncensored, an eclectic mix of scripted, stand-up, sketch, improv, and animated comedy – as well as topical comedy talk shows, game shows and classic situation comedies. Offering an unrivalled slate of original Canadian programming, Comedy reinvests nearly 50 per cent of its revenues into home-grown productions. Comedy is a division of Bell Media, which is owned by BCE Inc. (TSX, NYSE: BCE), Canada’s largest communications company, and is available in nearly six million households across the country.