Corner Gas: The Movie “Gasses Up” as Production Gets Underway

Corner Gas: The Movie “Gasses Up” as Production Gets Underway 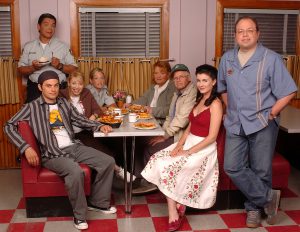 “The entire cast is back and we are all so thrilled to be shooting in Saskatchewan,” said Executive Producer Virginia Thompson. “We look forward to bringing our fans a Corner Gas movie they will cherish for years to come!”

Corner Gas: The Movie’s Kickstarter Campaign, a 30-day campaign promoting fan engagement through exclusive rewards and once-in-a-lifetime behind-the-scenes experiences, wrapped on June 18. Fan response has been overwhelming, as 2,500 backers have contributed nearly three times the target goal. The campaign reached 100% of its initial goal in just one day. The top reward went to Saskatoon philanthropist Bart Hunter – an opportunity to host a private screening with Brent Butt, bringing the world- debut of Corner Gas: The Movie to Saskatoon and turning it into a charity event. Support came from fans around the world, including Canada, the U.S., U.K., Europe, Australia, and as far afield as Saudi Arabia, Oman, India, China, Japan and Kyrgyzstan.

Corner Gas: The Movie will roll out as a national multi-platform event in November and December. The landmark feature film will open with an exclusive Cineplex Front Row Centre Events theatrical debut across Canada, followed by premieres on The Movie Network, CTV, and The Comedy Network, and complemented by a special collector’s edition DVD to be available for purchase before the holidays.

CORNER GAS the television series was originally developed by Brent Butt, Mark Farrell, David Storey, and Virginia Thompson for CTV and The Comedy Network. It premiered January 22, 2004 on CTV with 1.15 million viewers and was a runaway hit. Dog River became a favourite Canadian television destination. During its entire six- season run, CORNER GAS was the #1 Canadian sitcom in Canada, maintaining an impressive average audience of 1.4 million viewers over its 107-episode run. The series finale made television history when a record-breaking 3.02 million viewers tuned into the series finale on April 13, 2009. It was a new audience high for CORNER GAS and is still the largest audience on record for a Canadian scripted television series.