Corner Gas: The Movie Producers Invite Fans to be Part of the Movie-Making Experience with Launch of Kickstarter Campaign

Corner Gas: The Movie Producers Invite Fans to be Part of the Movie-Making Experience with Launch of Kickstarter Campaign

– Rewards include exclusive ‘backers-only’ merchandise and once-in-a-lifetime experiences, like a chance to name a character in the movie, be in the movie, and host a private world-premiere screening with Brent Butt – Contributing fans can become members of the Corner Gas Backers’ Club, an exclusive, online, all-access backstage pass to the making and release of the movie –

Toronto, ON (May 20, 2014) – As announced today by Bell Media and Telefilm Canada, the gang from Dog River is back and now the Executive Producers of CORNER GAS are inviting fans – both loyal and new – to be part of the movie-making magic of Corner Gas: The Movie. Beginning today, Prairie Pants Distribution launches a 30-day Kickstarter campaign to raise funds to provide once-in-a-lifetime rewards and experiences. Fans can access the campaign at cornergasthemovie.com. 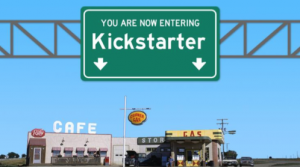 Click on the link for Brent Butt’s Kickstarter Video re Corner Gas: The Movie.

“With financing for Corner Gas: The Movie firmly in place, the focus of our Kickstarter campaign is to give fans the chance to be part of the-movie-making process from production all the way to the release of the film in December 2014,” said Virginia Thompson, Executive Producer.

Kickstarter contributions to Corner Gas: The Movie range from $5 to $300 for collectable, ‘backers-only’ merchandise, and from $500 to $8,000 for limited, personalized one-of-a kind experiences. Contributions may be made securely by credit card through Kickstarter via cornergasthemovie.com.

Rewards include a chance for backers to get their name in the movie credits, exclusive ‘backers-only’ t-shirts, ball caps, posters and DVDs, autographed scripts, rare collectables from the set, and VIP tickets to red carpet screenings. There are also opportunities to spend a day on set and meet the cast, name a character in the movie, appear in the movie – or, the ultimate experience – host the private, world-debut screening of the movie with Brent Butt at the backer’s local theatre.

Backers can obtain entry to the Corner Gas Backers’ Club, an exclusive, online, all- access backstage pass where they will receive video messages from the cast and crew, interviews with fans that visit the set, the latest behind-the-scenes updates, photos, and footage – from the cast reunion, to the making-of process, to red carpet premieres.

If the initial $100,000 Kickstarter goal is surpassed, additional funds will be used to enhance visual effects in the production, fly the cast to Cineplex premieres across Canada, and maintain the CORNER GAS set in Rouleau, Saskatchewan as a tourist destination for one year.

Corner Gas: The Movie begins production in Saskatchewan on June 23, 2014. The 90- minute feature film will be delivered to Canadians as a national event on multiple screens. The first-ever release strategy of its kind, the film will open with a Cineplex exclusive theatrical debut followed by premieres on The Movie Network, CTV, and The Comedy Network, complemented by a special collector’s edition DVD available for purchase before the holidays.