Corner Gas Now Available on Amazon Prime Video in the U.S., U.K, and Over 60 International Territories 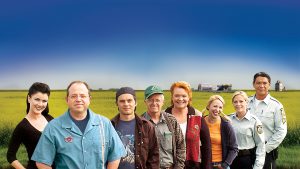 Corner Gas, Canada’s Most Popular Comedy of All Time, Now Available on Amazon Prime Video in the U.S., U.K, and Over 60 International Territories

“For years, fans have been asking when the original series and movie would be available on SVOD outside of Canada,” said Executive Producer Virginia Thompson. “We couldn’t be happier to bring Corner Gas to fans in new corners of the world this holiday season.”

The Corner Gas series premiered January 22, 2004 on Canadian broadcaster CTV and was an immediate runaway hit. During its entire six-season run, Corner Gas was the #1 primetime sitcom (Canadian or American) in Canada, maintaining an impressive average audience of 1.4 million viewers over its 107-episode run. The series finale made television history when a record-breaking 3.02 million viewers tuned in on April 13, 2009. It remains the largest audience on record for a Canadian scripted television series.

The series originally aired in over two dozen countries worldwide, including Superstation WGN in the US, and became a Canadian cultural phenomenon, spawning two chart-topping books, sold-out comedy tours, a successful line of merchandise, a top-selling series of DVDs, a Christmas special and song, dozens of notable guest stars, including two Prime Ministers and a thriving tourist industry in Rouleau, Saskatchewan, where Corner Gas was filmed on location.

Corner Gas: The Movie renewed its love affair with fans in December 2014. The film sold-out theatres across Canada, attracted more than 7 million TV viewers and won the 2016 Golden Screen Award for the most-watched scripted program of the year.

The Corner Gas franchise is produced by Virginia Thompson of Vérité Films, and Brent Butt and David Storey of 335 Productions, in association with commissioning broadcasters CTV and The Comedy Network.