Buckle Up! Corner Gas: The Movie Premieres in Theatres December 3 to 7

Buckle Up! Corner Gas: The Movie Premieres in Theatres December 3 to 7

– CORNER GAS fans encouraged to Light Up the Map of Canada and bring the movie to their hometown theatre – Milestone feature film will be distributed on multiple screens across Canada this holiday season beginning with Cineplex Front Row Centre Events theatrical debut, followed by premieres on The Movie Network, CTV, and The Comedy Network, then a DVD release –

TORONTO (October 2, 2014) – Corner Gas: The Movie will roll out as a multi-platform event beginning with an exclusive Cineplex Front Row Centre Events theatrical debut across Canada, December 3 to 7, 2014, it was announced today. The theatrical premiere will feature in-theatre cast appearances across the country, a CORNER GAS Tweet Up, giveaways and a special pre-event show including a special message from Brent Butt, CORNER GAS trivia, and excerpts from the Canada-wide CORNER GAS Sing-a-long.

Fans are encouraged to show off their hometown’s CORNER GAS pride. Beginning today fans can visit cornergasthemovie.com and Light Up the Map of Canada. By casting their vote online, fans have the opportunity to bring Corner Gas: The Movie to their hometown theatre.

Immediately following its theatrical release, the 90-minute feature will make its network broadcast debut in December on CTV and CTV GO, following a special preview for The Movie Network and TMN GO subscribers. The movie will also air on The Comedy Network in December (all broadcast dates to be announced), complemented by a special collector’s edition DVD available for purchase before the holidays. 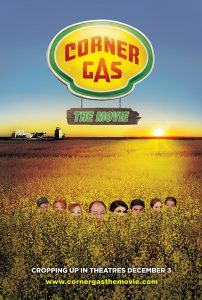 Click on link for Corner Gas: The Movie Teaser Video