– Movie rolls out with three red carpet galas in Saskatoon, Regina, and Ottawa on November 24, 25, and December 1 – Milestone feature film will be distributed on multiple screens across Canada this holiday season beginning with Cineplex Front Row Centre Events’ theatrical debut, followed by premieres on The Movie Network, CTV, and The Comedy Network, then a DVD release –

TORONTO (November 6, 2014) –Corner Gas: The Movie is set offer a new in-theatre experience for moviegoers. When the film opens December 3 to 7, 2014 at select Cineplex Theatres, audiences will be treated to more than a movie. For five nights only, moviegoers will be entertained by a CORNER GAS experience exclusive to cinemas: a CORNER GAS warm- up show. Hosted by Brent Butt and produced by the Executive Producers of CORNER GAS, the 20-minute warm-up show is packed with CORNER GAS fun facts, games, quizzes, random giveaways, footage from the Canada-wide CORNER GAS Sing-A-Long, and lots of laughs. The warm-up show wraps with an exclusive rendition of “O Canada” performed by award- winning singer-songwriter, Del Barber, and his band The Profiteers. 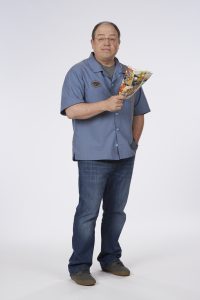 Also exclusive to the movie-going audience is the film’s closing credit sequence. In addition to bloopers and out-takes from the making-of the film, the closing credits will include footage of hundreds of fans across the country singing the CORNER GAS theme song “Not A Lot Goin’ On”, and crowds dancing and singing in the streets of “Dog River” led by CORNER GAS song- writer Craig Northey and two of its stars, Brent Butt and Fed Ewanuick. Capping off the credits is a special message from the CORNER GAS producers, a tip of the hat to fans for a decade of their support.

“Audiences are getting a new experience with Corner Gas: The Movie – where they are part of the movie,” said Executive Producer, Virginia Thompson. “It’s been great fun! We invited the public to get involved through Kickstarter, opened our sets during production, and engaged fans with the CORNER GAS Sing-A-Long. Now comes the theatrical experience, the icing on the cake, where fans get to see a movie they participated in.”

Over the 5-day theatrical event, CORNER GAS cast will make surprise appearances in select theatres across the country. One hundred random giveaways will be available to movielovers from coast-to-coast through the Selfies for Swag promotion (not available in Quebec). Fans will be encouraged to take selfies and post them to #CornerGasMovie for a chance to receive CORNER GAS posters, hats, and t-shirts. No purchase necessary. Full details will be available at cornergasthemovie.com on December 3.

Kicking off the theatrical release will be three red carpet galas attended by the cast, director, and executive producers of Corner Gas: The Movie. Festivities begin with a private world-debut screening and fundraiser at Scotiabank Theatre Saskatoon on November 24. The fundraiser is organized by Saskatoon philanthropist Bart Hunter who turned the top Corner Gas: The Movie Kickstarter Prize into a charity event, making it the reward that keeps on giving. A public world premiere follows at the Canada Saskatchewan Production Studios in Regina on November 25. Capping off the festivities is a red carpet gala for Ottawa dignataries at the National Museum of History in Ottawa on December 1.

Following its theatrical release, the 90-minute feature will make its network broadcast debut in December on CTV and CTV GO, following a special preview for The Movie Network and TMN GO subscribers. The movie will also air on The Comedy Network in December (all broadcast dates to be announced), complemented by a special collector’s edition DVD available for purchase before the holidays.