– Fuelled by a groundbreaking, event distribution model over three weeks in December, Canadians fill up on Corner Gas: The Movie on multiple screens: in-theatre, television, online, and DVD and Blu-ray –

TORONTO (January 19, 2015) – Nearly 60,000 moviegoers. More than 7 million TV viewers. More than 130,000 video starts. Tens of millions of social media impressions. And 56,000 DVD and Blu-ray units shipped. Canadians renewed their love affair with the gang from Dog River on multiple screens last month, as Corner Gas: The Movie pumped out the laughs stronger than ever. Just as it did when it began 10 years ago, the smash hit Canadian television franchise CORNER GAS continued to blaze new trails.

In partnership with Telefilm Canada, Bell Media, Cineplex Entertainment, and Executive Producers Brent Butt, Virginia Thompson, and David Storey, Corner Gas: The Movie is a 90- minute feature film that established a groundbreaking event distribution model that gave fans the opportunity to experience the film on multiple platforms over three weeks last month. Each platform offered audiences a unique CORNER GAS experience. The forward-thinking project engaged viewers in all regions of the country, promoting Canadian content and supporting homegrown talent on several screens during the holiday season: a Cineplex Front Row Centre Event, followed by premieres on The Movie Network, CTV, CTV Two, The Comedy Network, CTV GO, CraveTV, and then a DVD release. The result was maximum exposure for fans across the country.

“Rather than waiting a year between theatrical and broadcast, we distributed the film across all platforms over three weeks and offered unique experiences on each platform,” said Executive Producer Virginia Thompson. “The strategy allowed us to build audience excitement and momentum. Everyone took a risk and tried something new with this film. No one knew if it would work. The good news is that it worked for both fans and investors.” 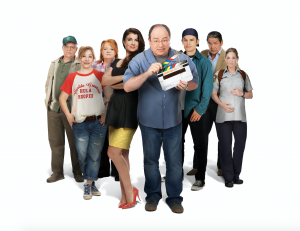 Highlights from the new and innovative multi-platform event release model include:

“Corner Gas: The Movie provided a unique out-of-home experience which generated some of the biggest weekend box-office numbers of the year for a Canadian movie,” said Michael Kennedy, Executive Vice President, Filmed Entertainment, Film Buying for Cineplex Entertainment. “Audiences truly loved sharing the experience of this movie in our theatres!”

“Released on multiple screens, CORNER GAS fans embraced the franchise and the film like never before,” said to the cast and the entire production team for delivering a wonderful movie that fans can truly be proud of, and of course our partners as well for all their hard work, collaboration, and effort to help release the film to Canadians.”

“We are thrilled with the response from retailers and consumers for Corner Gas: The Movie,” said Jonathan Gross, President of Video Services Corp (VSC). “We shipped nearly 56,000 units of the film on disc to Canadian stores and sales were strong over the holiday period. The multi-platform release was an experiment that worked very successfully, thanks to Canada’s love of Dog River.”