TORONTO (February 8, 2016) – Corner Gas: The Movie received two nominations from the 2016 Canadian Screen Awards, including a nomination for the esteemed Golden Screen Award for most popular TV Drama/Comedy in Canada and a nomination in the innovative Best Cross-Platform Project (Fiction) category.

The 90-minute feature film established a groundbreaking event distribution model that gave fans the opportunity to experience the film on multiple platforms over three weeks in December 2014. The forward-thinking project engaged viewers in all regions of the country, promoting Canadian content and supporting homegrown talent. Each platform offered audiences an exclusive CORNER GAS experience during the holiday season, including a Cineplex Front Row Centre Event, followed by premieres on CTV, CTV Two, The Comedy Network, The Movie Network, CTV GO, CraveTV, and a DVD/Blu-ray release. The result was maximum exposure for fans across the country. 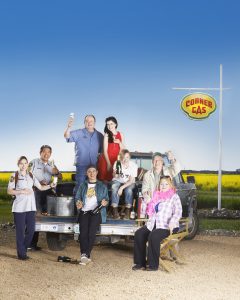 “Corner Gas: The Movie was a passion project for Brent Butt, David Story, myself, and the entire cast and crew,” said Executive Producer Virginia Thompson. “Our goal was to give fans a chance to be part of our movie, and to thank them for their love of our show. We’re thrilled Canadians embraced the film in record numbers, and we can’t thank Bell Media enough for their support. It’s wonderful the project has been recognized by the Canadian Screen Awards.”

About the CORNER GAS franchise

Corner Gas: The Movie made its sold-out theatrical debut as a Cineplex Front Row Centre Event opening in 102 Cineplex, Landmark, and independent theatres, December 3-7, 2014. The movie returned by popular demand to 38 select theatres, December 12-14, 2014. Nearly 60,000 moviegoers attended the eight-day engagement for a total box office gross of $694,212, making it one of the most popular attractions of the year for a Canadian movie.

Following its theatrical release, Corner Gas: The Movie returned to the network that made the franchise a household name. Broadcast premieres on CTV and CTV Two (Dec. 17, 2014), The Comedy Network (Dec. 22, 2014) and The Movie Network (Dec. 8-13, 2014) delivered a cumulative average audience of 3.3 million viewers, with an overall reach of 7.38 million viewers who watched some or all of the movie.

CORNER GAS the television series was originally developed a decade earlier by Brent Butt, Mark Farrell, David Storey, and Virginia Thompson for CTV and The Comedy Network. It premiered January 22, 2004 on CTV with 1.15 million viewers and was a runaway hit. Dog River soon became a favourite Canadian television destination. During its entire six-season run, CORNER GAS was the #1 Canadian sitcom in Canada, maintaining an impressive average audience of 1.4 million viewers over its 107-episode run. The series finale made television history when a record-breaking 3.02 million viewers tuned into the series finale on April 13, 2009. It was a new audience high for CORNER GAS and is still the largest audience on record for a Canadian scripted television series.

The series aired on Superstation WGN in the US and in over two dozen countries worldwide. It became a Canadian cultural phenomenon, spawning two chart-topping books, sold-out comedy tours, a successful line of clothing and merchandise, a top-selling series of DVDs, a Christmas special and song, dozens of notable guest stars, including two Prime Ministers and a thriving tourist industry in Rouleau, Saskatchewan, where CORNER GAS was filmed on location.