Corner Gas: The Movie Hits DVD and Blu-ray on December 16

Corner Gas: The Movie Hits DVD and Blu-ray on December 16

TORONTO (December 11, 2014) – There might not be a lot going on 40 kilometers from nowhere but there are a lot of ways to watch Corner Gas: The Movie. Following its theatrical premiere a DVD and Blu-ray will be released in Canada on December 16, 2014, from Video Services Corp. (VSC).

The special collector’s edition DVD and Blu-ray features the theatrical version of the film along with extended closing credits, which includes bloopers and outtakes, footage of hundreds of fans across the country singing the CORNER GAS theme song “Not A Lot Goin’ On”, plus crowds dancing and singing in the streets of “Dog River” led by CORNER GAS song-writer Craig Northey and two of its stars, Brent Butt and Fred Ewanuick. The DVD and Blu-ray are also packed with exclusive bonus features including cast and crew commentary, behind-the- scenes interviews, extended scenes, trailers and more bloopers and sing-a-long mashups. The DVD has a suggested retail price of $19.98. The Blu-ray is priced at $24.98.

All six seasons of CORNER GAS are available on DVD. Nearly one million units have been sold to date.

“CORNER GAS is our most popular television DVD ever and we’ve long been proud to be part of CORNER GAS history since day one,” declared VSC President Jonathan Gross. “We are happy to continue our relationship with the release of the Dog River gang’s first feature film.”

“We’ve had such a great experience engaging with CORNER GAS fans throughout the process of making this film,” said Executive Producer, Virginia Thompson. “We’re so excited that our fans will be able to take home this package full of hand-picked extras that you can’t see anywhere else.” 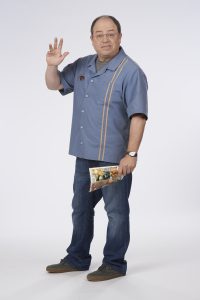 Corner Gas: The Movie made its Cineplex Front Row Centre Events theatrical debuted in select Cineplex and independent theatres across the country from December 3 to 7, 2014, and it was recently announced that the film will receive an extended in-theatre run this weekend. The movie makes its super-simulcast network premiere on Wednesday, Dec. 17 at 8 p.m. ET/PT on CTV, CTV Two, and CTV GO. Corner Gas: The Movie debuts Monday, Dec. 22 at 8 p.m. ET/PT on The Comedy Network and a special sneak peek on The Movie Network began on Monday, Dec. 8. Corner Gas: The Movie will be the first Canadian program to receive a first-look screening on Bell Media’s CraveTV when the premium subscription TV streaming service launches this Thursday, Dec. 11.