A Lovely Chat with Fred Ewanuick and Nancy Robertson

The following interview was conducted and written by Corner Gas fan Ian Richards.  The original blog post can be found on his Corner Gas fan website: http://cornergascorner.blogspot.ca/2018/04/a-lovely-chat-with-fred-ewanuick-and.html.

A Lovely Chat with Fred Ewanuick and Nancy Robertson

April 2nd. A red letter day in all our diaries. A day that will go down in the annuls of televisual history. I think we all know what I am talking about (if I was texting, this is where I would put an emoji of a winky face.) Yes indeed, today is Easter Bank Holiday and ITV 3 have scheduled a back to back Carry On marathon for a historic 37th year in a row!

Here in England, on a bank holiday such as today, the government arranges for it to pis…rain very hard so all we can do is stay in drink tea and watch the mandated Carry On films until the holiday is over or our eyes start bleeding, which ever comes first. It’s the law you know, if you fail to watch at least Carry on Camping and at Carry on at Your Convenience you can be fined up to £350 or do a week of community service.

Elsewhere in the world excitement has reached fever pitch as the premiere of Corner Gas Animated is only hours away! This week the cast and crew were running around Toronto promoting like crazy and having a lovely time of it by the looks of things. Three of the gang took time out of their hectic schedule to take the weight of their feet and have a little chat with me about the up coming show, future projects and an awful lot about how awesome British telly is.

Fred Ewanuick (FE), Nancy Robertson (NR) spoke to me over the phone. It was a real thrill when they called, mainly because it meant I wasn’t paying the phone bill. 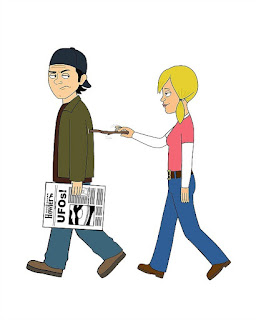 Corner Gas Animated is billed as a “re-imagining” how are things going to change from the original series?

NR – I don’t feel like a whole lot, except for the obvious that it is animated! You will feel really comfortable with it. It’s all of us, the same cast. The animators have done a really great job of capturing our expressions and pysicalities. The stories and the scripts are really good.

FE – Yeah, the world of Corner Gas hasn’t changed. I think it works, hopefully the people that really love Corner Gas will still have the feeling that that world hasn’t changed. Where the show get’s better is with the dream sequences and the flashbacks. The writers are able to go to more extreme places that they weren’t able to in the live version. That is where you are going to see the change, but they did a really good job of keeping the feel.

Judging by the clips that have been released, it does look like things are going to get rather wacky – for want of a better word

FE – Did you see the post apocalyptic bit? That’s where the show finds the new version if itself in those sort of bits.

NR – And you believe it, you believe these imaginary bits because you can imagine them coming out of the heads of all the characters. It doesn’t seem like it is pushing itself or trying too hard to go kinda out there, it feels kinda natural. 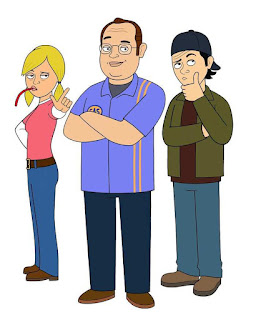 How many episodes have you made this season

NR – We just did thirteen this time, hopefully we will get another round, we’re keeping our fingers crossed! I think they are trying to get a universal sale of the show so it can reach other parts of the world, like the U.K.

FE – I got a feeling that the animated version might lend better to international appeal.

NR – We are better looking in animated!

FE – We are definitely better looking in animated!

Corner Gas Fan Corner reading stats come from all over the world. The show seems very popular everywhere, even in countries I have never heard of like Tranistria!

FE – I do get e-mails from people from Asia and Europe, I know there is a bit of a reach but it will be interesting to see if the animated version translates a little bit more or not, we will just have to see

I always felt the humour in the show is very English and would fit nicely on t.v. over here

NR – It is! We are all part of the commonwealth

FE – Not in the biblical sense!

NR – (Laughs) I hope not! The Brits and Canadians share the same sense of silly and silly is my favourite type of comedy. It takes some chances, it doesn’t try to ride the wave between drama and comedy – basically you are just going for it. I love anything British!!

FE – Maybe I shouldn’t speak for all of Canada, but what I love about British humour is that even if you go all the way back to Monty Python days, absurd as some of their skits were, their comedy still  comes from a place of character and subtlety. Personally I don’t find that in the comedy from our brothers and sisters in the south, I find it is a bit more broad and so I have always had a conection to British comedy. Maybe it’s because it is deeply rooted in our genetics?

NR – I think it is absurdest but it is rooted in the characters and that is why you believe it no matter how far it goes. If the comedy comes from the exterior, not from a character that is worked out from the inside out it is not as believeable. I love English drama too! I have been nuts about British comedy and drama since I was a kid! 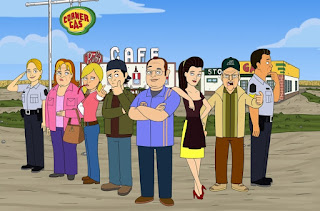 Which drama shows do you like (N.B. I didn’t actually ask this question but I feel I need to add it here to try give an impression of being proactive in the conversation)

NR – Brent and I have been watching that and The River, Scott and Bailey, even Midsomer Murders..

FE – Midsomer Murders are cheesy but I just love ’em! My wife always says “Remind me never to move to Midsomer”

It sounds like you get a lot of our television shows in Canada (N.B. I didn’t ask this either)

NR – Before Netflix you had to search The Knowledge Network and PBS to find the series. I also listen to Radio 4 for the plays

FE – I am just curious, are we supposed to talk about British television or Corner Gas?

Oh yeah, I forgot about that! So, seeing as Corner Gas is now in the realms of animation could we see a Marvel style extended universe starting up?

FE – I was just saying the other day it would be amazing to have guest spots from The Simpsons or Family Guy. I doubt that would happen.

NR – Who knows? Brent knows a few people that work on those shows.

How about of Corner Gas were to cross over with Hiccups and Dan for Mayor?

Nancy, your improv skills are legendary, when you are recording the dialogue for the new series are you able to improvise or do you have to strictly stick to the script because of constraints of the animation process?

NR – In the animated we have to stick more to the script and we can just add in a line or an ending to the dialogue. In the live action we could play a bit more because it connects with something you are doing psychically. Animation is done tightly to the script because it is easier to animate that way.

FE – Personally, I am more on the lazy side. I stick to the script, I don’t like to think too much.

Fred you are an old hand at animation with your work on Shop Class and Dino Trux is it something that you enjoy?

FE – The last few years I have been trying to get more and more into it. I have always loved cartoons, my wife and I still watch a lot of animation. I have always wanted to be a cartoon voice actor, but it is a tight kit group of talent and a tough nut to crack. I am pecking away and I keep going. 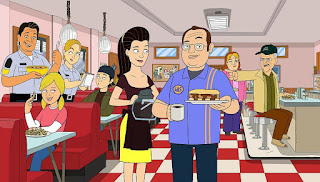 Suddenly, my two subjects and I exchanged pleasantries as they had to leave to get to their next interview. Their breathless double act and left me with a very large grin on my face. I had so many more questions to ask but it was probably for the best that we ended things there. There had been a knock at the door as I hung up the phone, it was the local constabulary wanting to ask me some questions. They had received information that I had not for filled my quota of Faulty Towers viewing this month.
———————————————————————

With thanks to Fred Ewanuick, Nancy Robertson, Margaret Sirotich and Jesse Wanagas for giving me so much of their valuable time.