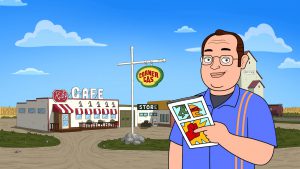 TORONTO — Between a Mad Max spoof, a fight between a sasquatch and a unicorn, and a pirate-ship scene, it’s clear fantasy will be a main feature of the upcoming Corner Gas animated reboot.

Creator and star Brent Butt says the animated version that premières April 2 on The Comedy Network will include the same types of fantasy sequences that were in the beloved live-action version, only ramped up.

“It fits into what people expect of Corner Gas but we just have a little bit of wiggle room to go a little farther now,” Butt said Monday in a phone interview.

Viewers got a first taste of that fantasy on Sunday night when a promo for the Canadian animated series premièred during the Super Bowl on CTV.

Butt said the series will also “see a sasquatch and a unicorn fight.”

“We would not likely have been able to do that in the real world, especially as graphically violent as we did in the animated world,” deadpanned the comedian.

In another episode, Fred Ewanuick’s character Hank imagines himself on a pirate ship with Brent, who is holding a lightsaber.

Corner Gas was the No. 1 sitcom in Canada throughout its entire six-season run, which ended in 2009. The cast reunited for Corner Gas: The Movie in 2014. The entire Corner Gas series and the movie are streaming now on CraveTV.

Butt said the reboot is set in contemporary times but the relationships between the characters are the same as they were in the live-action show and not the movie, in which Brent and Lacey (played by Gabrielle Miller) were dating.

The goal with the animation was “to make a show that would stand up quality-wise against any U.S. network prime-time adult animated show — Bob’s Burgers, The Simpsons,” Butt said, noting the look is “open and bright” and colourful, like the Saskatchewan sky.

“We also wanted to keep it fairly clean, which adult prime-time animation is generally.”

Butt said Season 1 will have a guest appearance, and he’s already writing a Season 2 in the hopes the show will be renewed.

The 13-episode, half-hour reboot sees the return of all the beloved characters of Dog River — but with a new voice.

Corrine Koslo stepped in to voice long-suffering matriarch Emma Leroy, who was played by the late Janet Wright in the original series.

Wright died in November 2016, when they were “pretty far down the road in terms of production,” Butt said.

Wright’s husband emphatically stressed to Butt that she would want Emma to be a part of the animated series. Her husband then suggested she be voiced by Koslo, who was a friend of the late actor.

“Her voice is really similar and she does understand Janet and her rhythms,” Butt said.

“It was just nice that it was a friend of Janet’s and a recommendation of Janet’s husband.”